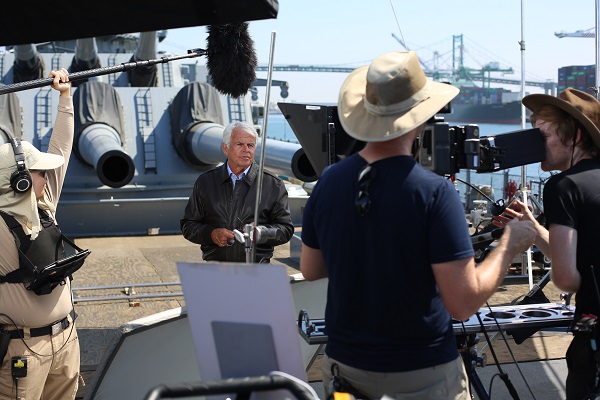 In June we were delighted to shoot once again with one of America’s favorite actors, Mr. William Devane, for the 6th year of our popular campaign for leading gold and silver company Rosland Capital.

The main location for the shoot was the foredeck of the USS Iowa, the center-piece of the Pacific Battleship Center’s USS Iowa Museum located at the Port of Los Angeles in San Pedro, California – home to the United States Battle Fleet from 1919 to 1940.

The Iowa (BB-61) is the lead ship in her class of battleship, and the only ship of her class to have served in the Atlantic Ocean, as well as in the Pacific. During World War II, she carried President Franklin D. Roosevelt to Algeria, on the first leg of a journey to a critical meeting in Tehran with Great Britain and the Soviet Union. She also served as the flagship to the Third Fleet, flying Admiral William F. Halsey’s flag at Japanese surrender in Tokyo Bay.

We are much obliged to the Museum for allowing us to shoot in such an impressive setting.

We were also able to shoot footage of the huge container port that makes up so much of the Port of Los Angeles, where over a billion dollars-worth of freight is in motion every day. The Port occupies 7,500 acres of land and water spanning 43 acres of waterfront and containing 27 passenger and cargo terminals.

We hope you enjoy our latest offerings.

Rosland Capital has earned an AAA rating from the Business Consumer Alliance and has earned outstanding customer reviews online. Most recently, Rosland Capital released special silver and gold coins in collaboration with the Ayrton Senna Institute, commemorating the 30th anniversary of Ayrton Senna’s win at Monaco. For more, follow Rosland Capital on Instagram or go to https://www.roslandcapital.com/.